A super-wealthy family battling each other and the world to maintain power and wealth. That is the premise of the HBO show Succession. The series is popular as it reverberates with the display of wealth and power. Those who have “it” are destined to be humbled.  Those without it, are merely fascinated viewers.

The bible has a story of a successful but troubled family.  Jacob, his wives, and sons lived in Canaan at the time of famine.  Meanwhile, in Egypt, there was plenty of corn. You may recall that Joseph had properly interpreted Pharaoh’s dreams and had prepared Egypt for a famine. Jacob learned of the bounty available in Egypt. He turned to his sons and admonished them, “Why do you keep looking at one another?”

Even before instructing his sons to go down to Egypt to purchase food, Jacob offers an ethical rebuke. Rashi, the great medieval commentator on Torah and Talmud, offers that the sons were feigning nonchalance to the famine. Their concern was how the family appeared to the neighboring tribes more than making the effort to obtain food. Jacob was wondering, “Why should everyone gaze at you and wonder at you because you do not search for food before what you have in your possession comes to an end?” 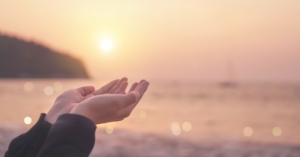 Sometimes we become obsessed with appearances. In the case of Jacob’s family, the assumption is that the brothers were so enwrapped in their status among local tribes that they hesitated to secure sufficient food supplies for the future. This biblical story presents a challenge for all of us.  Sometimes, do we worry more about appearances than we do about existential issues? Would Jacob’s sons have suffered starvation rather than search for food?

Jacob taught his sons that humility is the key to a secure future. Allowing our egos to dominate our thinking interrupts clear thought and timely action. Concern with appearances makes us hesitant to act, even when the circumstances are dire. Yet, we often only learn humility from experiences that knock us down or even challenge our survival.

After all, the haughty colorful coat-wearing Joseph who boasted of his dreams of dominance over his family became far humbler after his time in an Egyptian prison. Whether pushed into a pit or felled by famine, we are all going to learn a lesson in humility at some time in our lives. God spares no one from critical reminders that we are all unique but not special and all strong but breakable.  We all have egos, so we all need to learn humility.

When following the lives of the rich and famous, most often their downfall is arrogance. While entertaining to watch, watching the mighty fall is more than good television. The lessons of humility are a prelude to a moral message. Our lives may not measure up as biblical or fantastical, but we all suffer the misfortune of ego unchecked.

When Life is the Pits