Many Jews feel compelled to update their Passover seder each year. You might make your seder more entertaining with a new au courant theme. Other seder updates take on the issue of freedom where people are in danger. Topical seders can make Passover more relevant to our modern lives. That is why I’ll be talking about Ukraine this year.

Last year’s seder conversations included freedom from Covid. The year before that the popular theme was . . . Covid. Over the years seders have highlighted important issues like civil rights, Muslim refugees, the labor movement, and Soviet Jewry. Some themes are represented by additions to the seder plate. We honor women’s rights at the seder by placing an orange on the seder plate. If you aren’t familiar with the symbolism, it has to do with a juxtaposition of competing ideas of excluding and including women in Jewish religious life.

Reflecting on a current issue through the lens of the seder is an important tool. Starting with our liberation from Egypt, we can better empathize with other enslaved or imperiled people. As the Haggadah says, we are supposed to feel as if we ourselves were set free. We can amplify that understanding when also considering a modern story of a people in peril. 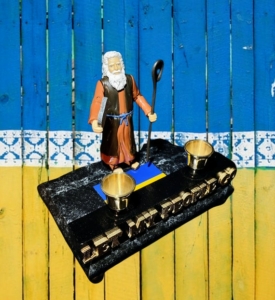 On the other hand, some feel pressured to create an entertaining Passover seder. I saw new Haggadahs created around themes like the Disney movie Encanto and the television show The Golden Girls. These will be added to the pantheon of the Schitt’s Creek Seder and the Mrs. Maisel Seder. These leitmotifs make the seder enjoyable. Yet, they detract from Seder’s best feature, the opportunity for family and friends to express gratitude for the freedom we enjoy.

This year the world is more imperiled than last year. The war in Ukraine has disrupted the lives of 44 million people. Many Ukrainians have emigrated or escaped. Many more are trying to reach safety. There is no liberty when sirens are blaring the warning that bombing raids are upon your city. There is no freedom when your family is hiding underground to stay alive.

This year, I want to reflect on Ukraine at our Passover Seder.  I will add an icon to the seder table in honor of Ukraine and I urge you to do the same. Perhaps you can use a blue and yellow flag or sunflowers which are symbols of Ukraine. You might add an olive to your seder plate, to remind us that the olive branch is a symbol of peace. When you reach the part of the seder where we discuss the symbolism of matzah, maror, and the bone, point to the symbol of Ukraine as well.

This Passover let’s focus on the core reason for the Seder. We should take time to appreciate our freedom and commit ourselves to liberating all people from oppression.

Is it Dayenu (Enough Passover for Us)?
Scroll to top