George Takei played Captain Sulu on Star Trek — the helmsman of the U.S.S. Enterprise. Less known is that in 1942 George Takei and his family were forced into an internment camp for Japanese Americans. The deportation of Japanese residents was deemed a “security” measure during World War II.  Takei’s story reminds us that Jews too have been oppressed and denied our rights. Yet, these stories are not mere history as freedom is denied in the face of fear and prejudice.

In the opening verses of Exodus, the Hebrew people living in Egypt were objectified and enslaved. Other people 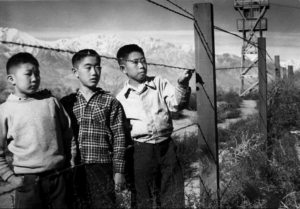 have suffered similarly. Discrimination against Japanese Americans is emblazoned in our jurisprudence in Korematsu v. the United States. The Supreme Court upheld the Government’s right to move 120,000 persons of Japanese descent from their homes to internment camps.

Just after the United States entered World War II against Japan and Germany, President Franklin Roosevelt established internment camps for Japanese persons.  Roosevelt’s actions were not unlike that of Pharaoh over 3,000 years ago. As Exodus reports, Pharaoh said of the Hebrews “let us deal shrewdly with them, so that they may not increase; otherwise, in the event of war they may join our enemies in fighting against us.”

There was no hard evidence that Japanese Americans had divided loyalty. Our democratic system gave way to prejudice and fear. By contrast, Caucasian-looking German Americans were not similarly detained and deported.

Fred Korematsu had a story similar to that of George Takei. On May 30, 1942, Fred Korematsu was arrested in California and taken to the Tanforan Assembly Center. There he was housed in a horse stall. On September 8, 1942, Fred was tried and found guilty of violating the law directing Japanese Americans to surrender and be relocated.  Ultimately, Korematsu was moved to a relocation center in Topaz, Utah, described also as a concentration camp of harsh conditions.

Every day in prayer, Jews remember our time of oppression in Egypt and celebrate our redemption by God. The daily prayer should also remind us that freedom is precious and fragile, easily denied us by powerful leaders. Our Jewish mission, fashioned by our history, is to be vigilant against oppression. We can neither be bystanders to the supremacists who marched in Charlottesville nor apathetic toward elected officials who would deny any American their rights.

As we read these opening verses of Exodus, may we be inspired to oppose all oppression and watch over this fragile democracy in America that is easily upended.

This One Precious Life
Scroll to top