Habib Rahman, the Lord Mayor of Newcastle, in the UK, has helped organize relief for the Ukrainian city Novograd-Volynsky. These two cities aligned through an international network of municipalities named Newcastle (Novograd in Ukrainian means Newcastle).  My great-grandmother, Anna, left Novograd-Volynsky in 1911. But for her, I might not be writing this today, when my thoughts about Ukraine are influenced by a Muslim mayor in Newcastle.

As war rages in Ukraine, I researched Novograd-Volynsky, in particular. The community’s history has been documented by Leonid Kogan, a Jewish historian living in that region. Jews began to arrive there in the 1480s. Until the 20th Century, they lived in relative security. I corresponded with Kogan to learn more about my family. I only knew of my great-grandfather, Azriel Krasnastovsky, who was a shoemaker and died in 1908. Kogan helped me to identify the names of family members who remained in Novograd-Volynsky. Yosef, brother to Azriel, moved east to Kazakhstan during World War II. While he survived the war, his two sons died as soldiers.

The larger story of Novgorod-Volynky’s Jews is also a story of ongoing depravity and oppression. As World War I ended and Communism arose, the Jews were caught between revolutionary Bolsheviks and marauding Nationalists. In turn, bands of soldiers and gangs of peasants robbed, brutalized, and murdered the local Jews. Kogan recorded stories that are too horrific for me to repeat here.

The killing continued in each of the succeeding decades. In the 1930s, Stalin starved Ukraine and murdered intellectuals. In August 1941, most of the remaining Jews of Novgorod-Volynsky were shot by Nazi death squads.

Now, we are witness to another, and perhaps a final, sad chapter for the Jews of Novograd-Volynsky. Help for this region is coming from people like Mayor Rahman of Newcastle, who knows about senseless cruelty. As I researched Novograd-Volynsky, I came upon this story. Lord Mayor Habib Rahman’s father Azizur was stabbed to death in 1977, 10 days after arriving in London from Bangladesh. Azizur Rahman was working in a curry restaurant. A disgruntled patron returned with a knife and murdered Azizur. Shortly after, Rahman’s mother moved the family away from London.

In 2021, Mayor Rahman and his family returned to the restaurant for the first time in an act of reconciliation with the past. Mr. Rahman praised his mother for being a “tower of strength and a true symbol of humanity” who had led the family in forgiving the killer in accordance with their Islamic faith. I thought of the strength of my great-grandmother Anna who brought her young family to the United States after the death of her husband.

As I reflected on Mayor Rahman’s story, I reflected on my own relationship with Ukraine. I have been tentative in my support for Ukraine. Jews were too often attacked by Ukrainians and I am wary of them. However, now is the time to release resentments. I am inspired by Mayor Rahman and his family. Now it is time for me to forgive in accordance with my faith.

We celebrate Purim this week, perhaps as a reminder that the Jewish people have long been targets of hatred. Sometimes we outsmart the enemy as Esther did in the Purim story. Sometimes we escape to safety as my great-grandmother did. Too often, we fall victim to our adversaries. 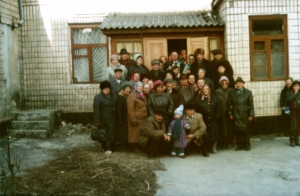 Purim celebrations this week will be overshadowed by the war in Ukraine. Yet, we will honor this festival. Leonid Kogan shared that the small Jewish population of Novograd-Volynsky in the Soviet era still gathered to celebrate Jewish holidays. Kogan posted a picture of a Purim gathering in 1977.  It is with those Jews in mind, that I will celebrate Purim in 2022.

For all those who have ancestors from Ukraine, for all those whose relatives were victims of hate, and for the sake of our Jewish heritage, we gather for Purim. We gather in safety and freedom. We gather in recognition that our people have been bequeathed a legacy of resilience. We gather to say that being Jewish means standing up to tormenters like Haman or Putin.

May the Holy One who makes peace in the heavens bring peace down to all who cherish life.

The Best (Chicken) Soup Ever

A Kosher Humanity
Scroll to top