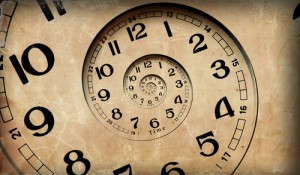 by Rabbi David Evan Markus as posted in My Jewish Learning on March 19.

When does time begin? What does time measure? What came before the beginning? Such mind-bending questions evoke timeless truths especially relevant at this moment in the Jewish year.

Humans mark space and time from origins. Moderns traveling east or west across the globe chart distance in longitude from Greenwich, England, a relic of the British Empire’s dominion. Modernity marks secular time against Greenwich Mean Time, which scientists call “Universal Coordinated Time,” as if the whole universe sets its clock by London’s lights. Spiritual time and space also chart from starting points. Jews traditionally pray toward the Western Wall in Jerusalem, as if the Temple once towering above was the center of the world, the axis mundi around which all else revolves.

Jewish time spirals from not one but four origins – four New Years, each with unique spiritual and historical purpose. Rosh Hashanah (“Head of the Year”) marks the physical creation, cycle of teshuvah(repentance), ancient tax year, and sabbatical and jubilee years. Tu B’shevat (“New Year of the Trees”) marks the agricultural birthday of trees. Rosh Chodesh Elul marks tithe years for cattle and Moses’ ascent of Sinai to receive the second tablets.

Tomorrow night (March 19, 2015) begins the fourth Jewish New Year, Rosh Chodesh Nisan, origin of Jewish identity and spiritual consciousness. Two weeks before the Exodus from Egyptian bondage, “God said to Moses and Aaron in Egypt: ‘This month [Nisan] will be for you the first month… of your year,” a tribute to the upcoming liberation (Ex. 12:1-2). This tribute to freedom – defining Jews as a people released from bondage to reach toward spiritual liberation – is the origin of Jewish time. In a spiritual sense, Jewish time exists only in relationship to our bondage and liberation.

Jewish time exists only in relationship to bondage and liberation. If not for liberation from bondage, there would be no Jewish time. As then, so now. When we are gripped by inner emotional or spiritual bondage, in a sense, Jewish time stops. In a real sense, in bondage we stop living. Just as Shabbat reboots the weekly Jewish work cycle, Rosh Chodesh Nisan reboots Jewish time itself.

A coincidence of Rosh Chodesh Nisan helps illuminate this truth. On this day, the newly freed Israelite slaves wandering the desert completed and inaugurated the mishkan, the ancient cultic focus for God’s indwelling presence among the people. As the people journeyed, the miskhan was the center of their camp. The mishkan, symbol of holiness and holy living, became our forebears’ symbolic origin of space, linked to Rosh Chodesh Nisan as their origin of time. It was the mishkan to which our forebears brought not only celebrations and triumphs for gratitude, but also guilt, shame and defeat to be ritualized and released. The mishkan offered ways to express yearnings for holiness, to release heart and soul continually from the grips of emotional and spiritual bondage.

The ancient cycle of bondage and liberation continues to this day. Rosh Chodesh Nisan marks the two-week countdown to Passover, marking the liberation from historical bondage. Each day and each moment invites us into emotional and spiritual release from inner bondage. Community and ritual – playing out in space and time – bring this drama to life on the human plane.

And now – right now, with Rosh Chodesh Nisan – is our time to begin again. Time itself refreshes and renews. We get ready for freedom. At long last, we welcome the radical liberation of Now.