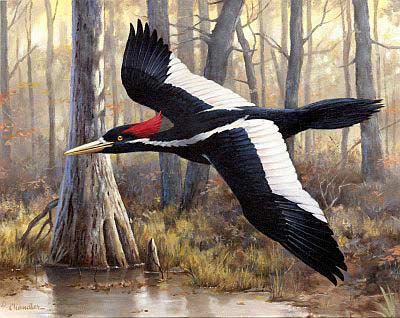 A bird referred to as the “Lord God” has been declared officially extinct. The ivory-billed woodpecker is no more. Millions more species of plant and animal life are now imperiled. We’ve read similar stories before. I recall the story of the flood in Torah.

I found a description of the bird called “Lord God” by Chelsea Steinauer-Scudder. The ivorybill had a regal crested head, deep red on the males, velvet black on females. The rest of the bird’s plumage was composed of layered sheens of blue-black feathers interspersed with striking patterns of white on the wings and neck.

When the people of Arkansas or Louisiana would catch a glimpse of the wide-winged, graceful swooping flight, they might call out in amazement “Lord God – what a bird!”

After the earth became corrupted, the Lord God determined that all life would be extinguished but for Noah’s family and the animals they rescued. Noah saved representatives of all the species of animals.

In the twentieth century, people caused the extinction of the last bird called Lord God and are set to eliminate many more. Here’s how it came to pass.

The logging companies felled the sweet gum and Nuttall oak trees of the American South. Consequently, there was less room for the Lord God to find food. As Rachel Carson wrote in her seminal work, Silent Spring, “No witchcraft, no enemy action had silenced the rebirth of new life in this stricken world. The people had done it themselves.”

If the Lord God had survived into the 1960s, DDT and other pesticides might have killed the last of them. DDT had disastrous environmental consequences on bird populations, human populations, and entire ecosystems. Pesticides permeated the seas and soils, and pesticides were traceable in everything from birds’ eggs to the breast milk of every human mother on the planet.

In the 21st century, our dependence on fossil fuels has caused disastrous climate change which threatens every species including humankind. The environmental apocalypse may now be unavoidable. Man may have finally succeeded in emulating God, but it is the God of Genesis who destroyed all life but for a few representatives of each species. How much more of a warning do we need than a headline that includes the words “Lord God” and “dead”?

The singer Sufjan Stevens wrote these lyrics for a 2005 documentary about the Lord God bird:

In the delta sun, down in Arkansas
It’s the great god bird with its altar call
And the sewing machine, the industrial god
On the great bayou where they saw it fall

In the morning paper, on social media, on Cable TV and in my news feed, while we worship an industrial and electronic God, we ignored the altar call. Before our eyes we are watching it all fall.

Back to the beginning