Lod is an ancient city with modern problems. Lod was first known to Americans as the location of the main airport. An important perspective of modern Israel is found in Lod, its history and histrionics. Two such perspectives were shared by two very different women.

Lod is mentioned in the Talmud. Lod occupies a strategic point between Tel Aviv and Jerusalem. It gained notoriety for Ben Gurion’s order in 1948 to push the Arab residents of Lod out of the way. Modern historians have recast a dark light on the reckless expulsion of the Arab population. A few Arabs remained, a few returned, and diverse other groups moved into Lod. Lod is not an economically healthy city. Many groups have come and gone over the decades since.

Our group first met the founder of Omnia, dressed in more traditional draping, hair, and neck covered in black. Omnia is a direct Quranic name that means “wish” or “hope.” The group provides support for the Arab women of Lod.  Many live in poverty or are allowed limited access to the world by their husbands. Others are academics who wanted the support of other women who both work and raise families. We enjoyed a presentation on the Omnia’s impact on the culture and economy of the community. As a respectful observer, I asked no questions about women’s roles in Arab society or the reticence of some Arabs to participate more fully in the Israeli economy. I, and others in the group, saved our skepticism for our Jewish speaker.

We arrived at the Denver community center in Lod, which by its very name lets you know something about the origin of its American donors.  Two women warmly greeted us.  Their dress was fashionable yet modest. They represented Garin Torani (Hebrew: גרעין תורני)(lit. Torah Nucleus), a group of religious Zionist individuals and families who settled in communities with a low religious Jewish population. They aim to strengthen the community’s connection to religious Judaism, promote integration (of religious and non-religious Jews), and bring about social change. Sadly, difficult prejudices are associated with the work of the Garin Torani. 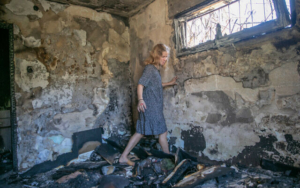 Cleaning up and rebuilding the central Israeli city of Lod after last weeks riots. May 19, 2021. Photo by Yossi Aloni/Flash90

Our discussion focused on the riots in Lod in 2021. At the time, Israel’s “lockdown” of the al-Aqsa mosque had infuriated the Muslim leadership. The speaker declared that the peaceful coexistence of Arabs and Jews in Lod was disturbed as the Muslim leadership pushed the populace to riot. Five days of riots left two dead, one Jew and one Muslim, and some destruction in the city.

The Garin Torani have used the saga of Lod as a cautionary tale against the Israeli Arabs of Israel. Stories have spread of separate times for Arabs and Jews visiting parks and separate sections of community centers. Our speaker professed devotion to helping all people. Yet, these stories spoke to a different, troubling narrative.

Like the blind men touching different parts of an elephant, I have only presented specific stories of two residents of Lod. There are 80,000 other such stories – Muslim and Jewish, Yemeni, Ethiopian, and Ashkenazi. Only by visiting Israel can we attempt to feel our way around the entire elephant. I am grateful to the Jewish Federation of Washington for providing me with this opportunity to begin to fathom the depth of these complex issues.

Listen to Me!
Scroll to top