Today’s goal was to unravel the knotty mess that is Israel. That goal is utterly unrealistic. In Jamaica, they say “Ya Mon”. In Costa Rica, they say “Pura Vida.”  In Israel, they say “it’s complicated.”

We began our day exploring the Israeli response to the Russian war against Ukraine. To keep abreast of the needs of Jews in Ukraine, there is a situation room at the Joint Distribution Committee Headquarters in Jerusalem. We visited and spoke with staff and volunteers. In a glass conference room, there are three large screens, one with data about the progress of the war, the second providing the location of Jewish communities, and the third offering data about available services. This command center is a marvel of technology and determination. 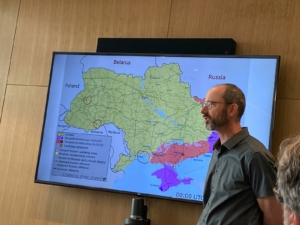 The Joint provides direct services. In-home attendant care for the elderly, food cards or parcels where food is scarce, medical supplies, and even safe passage for those who need to flee their homes. Just before the war, 18 chesed houses in Ukraine began to stock up on food, water, and medical supplies. As bombs were falling, 70% of the in-home caregivers showed up. Many are walking long distances as public transportation had stopped in many cities.

Meanwhile, the Jewish Agency has helped over 17,000 Ukrainians with Jewish “lineage” to make Aliyah. Some non-jews have come to Israel, primarily on a temporary basis. We spoke with a father and son of a Ukrainian family who left for Romania as the war began. The mother was Jewish by birth but had been given up for adoption.  Her birth mother had come from Israel and gave proof to the family’s Jewish lineage. Perhaps for the first time in history, it paid to be identified as Jewish in Ukraine.

Agency representatives and associates talked about the many needs. Transportation, hotel rooms, food, and clothing were provided.  Some families left with nearly no possessions. And the Agency also provides psychological and spiritual care. A young Russian Jewish woman studying to become a Rabbi in Israel told us of her conversations with Ukrainian refugees. Some turned to her for solace. Others rejected her because identified as Russian. Even providing spiritual care is problematic.

Our gifts to the Federation’s campaign for Ukraine are primarily funding the Joint and the Jewish Agency’s efforts. Visiting with refugees proved the impact of our gifts. I was filled with emotion to embrace a 17-year-old young Ukrainian man, with little prior knowledge of Judaism, now wearing a kippah and planning his future as an Israeli.

And all that was before lunch. We hardly had time to discuss the impact of welcoming tens of thousands of Ukrainians as Israel confronts a housing shortage. Or to discuss how carefully Israel must tread so as not to upset the Russian sponsors of neighboring Syria. And the war in Ukraine is not the only source of refugees at this time.

I heard some amazing stories about Ethiopian refugees, which I will share in my next report.

Thank you to Gil Preuss, CEO of the Jewish Federation of Greater Washington for your leadership.